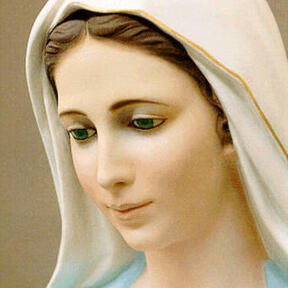 ​True Devotion to Mary, by Fr. Chawki Karam
The Family of Saint Sharbel
Friday, May 24, 2013 – Annaya

Introduction
In a Marian Church, such as the Eastern Church, in general, and the Maronite Church, in particular, there is no need to call and exhort people to honor the Blessed Virgin Mary, because devotion to Mary is widespread. The signs of its prevalence are many: the statues planted on roads, in gardens and in homes; her images and icons that adorn our homes and churches; the rosaries we wear around our necks, hang in our cars, tattoo on our bodies, and paint on our cars; the many communities named after her, etc. Nevertheless, we really need to discern what exactly constitutes true devotion to Mary. To do so, we must return to the Apostolic Constitution on the Church (Lumen Gentium) which dedicates paragraphs 60-69 (arabic text wrongly says 60-96) to the relationship between the Blessed Virgin and the Church.

1-The Council’s invitation to Marian devotion
In paragraph 67 (arabic text wrongly says 98) of the Apostolic Constitution on the Church (Lumen Gentium), the Holy Synod “deliberately teaches this Catholic doctrine and at the same time admonishes all the sons of the Church that the cult, especially the liturgical cult, of the Blessed Virgin, be generously fostered.” It calls for the promotion of all exercises of piety recommended by the magisterium of the Church and the respect of all decrees given around honoring her image.
At the same time, the Synod “exhorts theologians and preachers of the divine word to abstain zealously both from all gross exaggerations as well as from petty narrow-mindedness in considering the singular dignity of the Mother of God. Following the study of Sacred Scripture, the Holy Fathers, the doctors and liturgy of the Church, and under the guidance of the Church’s magisterium, let them rightly illustrate the duties and privileges of the Blessed Virgin which always look to Christ, the source of all truth, sanctity and piety. Let them assiduously keep away from whatever, either by word or deed, could lead separated brethren or any other into error regarding the true doctrine of the Church.” It also reminds the faithful “that true devotion consists neither in sterile or transitory affection, nor in a certain vain credulity, but proceeds from true faith, by which we are led to know the excellence of the Mother of God, and we are moved to a filial love toward our mother and to the imitation of her virtues.”

2-Marian devotion founded on true faith
We do not adore Mary, because adoration is only for God, the loving Divine Trinity; rather, we honor her. In the same vein, we only believe in God and in what he reveals to us, shows us, and wants from us, because God alone is the proper object of faith. Vatican II affirms this in the first sentence of its section on the Virgin Mary: “There is but one Mediator as we know from the words of the apostle, "for there is one God and one mediator of God and men, the man Christ Jesus, who gave himself a redemption for all” (1 Tim. 2:5-6) (60).
Therefore, true devotion to Mary cannot and must not turn away, distract, remove, or forbid any faithful from God’s love in its totality; the faithful is called to love everything in God and for him, including the love and devotion for Mary which must enhance, and not impede, this pure faith and sublime love for God. This makes sense, especially when it comes to Mary, because we know Mary only through her involvement in God’s plan of salvation, as the abovementioned conciliar text states:  “The maternal duty of Mary toward men in no wise obscures or diminishes this unique mediation of Christ, but rather shows His power.” (60)

Consequently, these are the faith foundations of a true and proper devotion to the Virgin Mary:
Thus is Mary’s role revealed in her cooperation with God in the salvation of her sons and daughters in a manner that is tightly bound to her Son. Therefore, her role “neither takes away from nor adds anything to the dignity and efficaciousness of Christ the one Mediator.” (62) As the Conciliar text states, “no creature could ever be counted as equal with the Incarnate Word and Redeemer.” (62) Consequently, devotion to Mary brings it about that the Son, “through whom all things have their being (Col. 1: 15-16) and in whom it has pleased the Father that all fullness should dwell (Col. 1:19) is rightly known, loved and glorified and that all His commands are observed.” (66)

3-Marian devotion consists in imitating Mary’s virtues
Looking at Mary, the daughter of our Land, and especially at her faith journey, we cannot help but shout with Elizabeth: “Blessed are you, Mary, for you have believed what the Lord said to you.” Joining all the generations who called Mary blessed does not mean only honoring her as Mother of God and Mother of the Church, but also looking up to her many virtues as an example for the Church and her children in their pilgrimage from Earth to heaven.
Saint Bernard was not exaggerating when he said that whoever is a child of Mary will never know damnation.