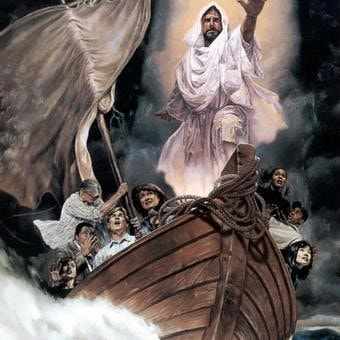 “Jesus quiets the storm”
“In him, from him, with him and to him.”

Monastery of Our Lady of Faytroun
Spiritual Retreat October 5-6, 2002

Introduction:
Jesus, our friend and road companion, comes to us, talks to us and touch us deep inside, and burns us so we can really feel him.

Jesus Christ is not some person or dogma we read and learn about in books. As long as we see him this way, he remains outside our heart and being, and foreign to our journey, no matter how far we walk with him. When I go back to my job and daily life, he and I will go our separate ways. But if Jesus enters the reality of our lives and burns us like an ember, everything starts to remind us of him and to bring us back to him.

Mark 4:35
“Jesus quiets the storm”
Jesus was still at the Sea of Galilee when some people and pharisees arrived from Jerusalem asking him: “Who are you?” Jesus had so far been talking to them in parables, and he had asked his disciples to cross over to the other side of the sea. What was on the other side? The Decapolis. The Sea of Galilee separated a majority Jewish area, on one side, and a majority pagan area, on the other. Whoever crossed to the “other side” was like going into Satan’s lair.

“Leaving the crowd behind, they took him along.” Jesus did not want to cross alone. To cross over he needs a boat, someone to steer the boat, and companions. When they had advanced to the middle of the sea (and people believed that the sea was the residence of demons), a furious squall came up, and they thought they were drowning. They were very scared, and Jesus was sleeping in the stern, so they woke him up, and the gist of what they said to him was: “Where are you? How could you abandon us like that? Do you not care? Do you not empathize?” He woke up and rebuked the wind and told it to be quiet, so it quited down. After he did that, he addressed the disciples and taught them a lesson: “Still?” After all the time I spent with you, after the comradery and the accompaniment, “you still do not believe?” This terrified them, so they started asking each other: “Who is this?” This experience revealed to them their ignorance of the identity of Jesus, and their flawed knowledge of him, because there were still many aspects of his person that they have not experienced yet. When Jesus asked them elsewhere: “Who do people say I am?”, he was really asking about his disciples’ opinion of him. “What have you experienced of me? What do you know about me? Who am I in your eyes? Who do you think can control the elements? Who are you Jesus?”

Here’s a good question for today: “Who are you, Lord? We have been told so many things about you, but who are you today?” This is a very important question that Jesus keeps asking you: Who am I for you? He will keep asking until the “Forgiving Ember,” Jesus himself, burns you in the deepest depth, which is your heart.
In this passage, Jesus was in the middle of the sea and this was the first instance of him showing his power to control nature. Then he reached the other side (Mark 5: 1-21), the faithless place – the bare place that allowed demons to infiltrate and roam freely until they became a great army.

“They arrived there.” Jesus went there only for this man. He came to the Decapolis only for this man. Who is he? He’s anonymous, a dweller of cemeteries. As residence of the dead, cemeteries were considered impure by the Jews and ancient religions. He is a dead man in the worst possible way. He is so far gone that his enslavement is stronger than chains. The evangelist tells us that this man was in such dire straits that Jesus had to come to him to restore him to his dignity, humanity and freedom.

Catching sight of Jesus from a distance, he ran up and prostrated himself before him, crying out in a loud voice, “What have you to do with me, Jesus, Son of the Most High God? I adjure you by God, do not torment me!” He had been saying to him, “Unclean spirit, come out of the man!”
Jesus had come specifically to chase out this evil spirit: “Come out of him!” He then asked him his name in order to control him. In the Bible, naming things means having power over them. The demon replied: “Legion is my name. There are many of us.” We see Jesus here involved in a slow, meticulous surgery that resembles our slow journey with him.

The demon cleverly asked to be allowed to enter the swine. Swine is unclean, for Jews, and it is therefore harmless to throw pigs in the sea, just like, in the Book of Revelation, the dragon was thrown to the bottom of the sea and was chained to annihilate his power over humanity.

“The herd of about two thousand rushed down a steep bank into the sea, where they were drowned.” The swineherds ran away and reported the incident in the town and throughout the countryside. And people came out to see what had happened. As they approached Jesus, they caught sight of the man who had been possessed by Legion, sitting there clothed in respect, dignity, and humanity. He was in his right mind and healthy. They were so afraid that they began to beg Jesus to leave their district. They could not handle this much fear, so they could not approach Jesus. We observe Jesus - who has power over the water, the winds, and the sea and who fights demons – granting them their wish and leaving. This is what’s so amazing about Jesus and that’s what we need to be aware of: Jesus, the son of the Almighty, stands powerless before our freedom. Our spiritual experience shows us how unstable we can be: sometimes we accept Jesus, sometimes we reject him. Jesus remains there, obedient, respectful and tactful, standing at the door and knocking until we remember him and allow him to enter.

But Jesus will not leave them to their fear and ignorance. He left with them a leaven of proclamation that talks about him and prepares the way for him until the hour comes, after his death and resurrection. The sign of his passage through that impure land is the blessing and goodness he left behind. He left there a free man and a saved people, and not only the possessed man, but all the dead who were at risk of being possessed. This man became a new preacher of the gospel.

In Summary:
We are dear to Jesus’ heart. “You are precious in my eyes.” Jesus stays with us wherever we go: at home, at work, etc. Wherever we go, Christ will find us.

Personal question:
Where are we in relation to Jesus? Are we distant from him, or have we experienced his love until death for us? Have we really experienced that, or did we just read about it in books? “He died for us and rose from the dead.” Jesus can seek us like he seeks the lost sheep. Wherever we go, Jesus watches over us and follows us. “Am I precious in his eyes?” What value does Jesus see in me? Have I experienced how much he loves me, how he leaves the whole world and comes specifically to seek me and whisper in my ear?

Jesus has a word to say to each one of us, and he makes us hear it deep down in our hearts. Amen.
Family of Saint Sharbel USA
9340 Braymore Circle, Fairfax Station, VA 22039