Followship and the Mission of Evangelization 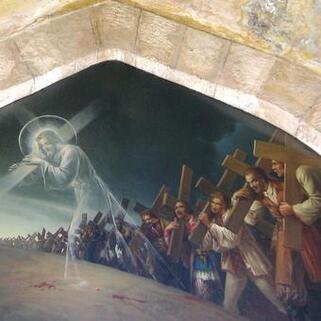 Followship and the Mission of Evangelization
By Fr. Maroun Moubarak m.l.m.
http://www.ayletmarcharbel.org/content/Following-jesus


a.The first characteristic: going out to meet people. Right after the descent of the Holy Spirit on them in the Upper Room, the Apostles went out to meet people and witness to them about their experience with Jesus and their understanding of his special mission for humanity. This evangelization has three features:
i.The content of the mission itself, which is the Good News the Apostles brought and talked about: The risen and victorious Jesus is the same Jesus they knew before the Crucifixion. There is no difference between him and the historical Jesus.
ii.Traveling for the mission in search of souls, in order to awaken faith in them and to draw them to Jesus. This is one of the characteristics of the mission which involves geographic movement.
iii.The Apostles received this mission from Jesus through the Holy Spirit: Jesus commissioned them to go and make disciples of all nations and to baptize them…Jesus, then, chose those whom he willed to accomplish this task, and he sent them on a special mission. The mission is presented in his name by the Holy Spirit.

These three features determine the direction of the mission and its theological understanding within the general mission of the Church. This is what the Church actually implements in her mission today.

It is the proper role of the Holy Spirit to make the Church “apostolic,” by gathering the faithful and forming them into a “community” which assembles to hear the “Good News,” to live in communion, prayer, and the Breaking of the Bread.  It is a fraternal communion, a Koinonia. . Thus, these communities preached the “Good News” through their life witness because they were characterized by their unity of heart and soul, communion on all levels (spiritual, material, and human), the distribution of goods among all so that none remain in need, joyful living and simplicity of heart, enthusiasm, openness, and apostolic work. This is how the Church carried out her mission by witnessing and shining her light before putting in the effort and starting to work. The Holy Spirit was present and active in the heart of every move the Church made, and he is active especially in each of her members.
​
This last category includes in a way our own community characterized by carrying out this evangelization through: Amen.