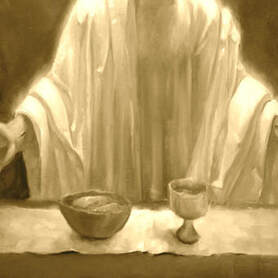 We have customarily been meeting at the end of every year, on the last Friday of the last month of the year, to partake of the Word and the Sacrifice. Inspired by the Spirit, I figured that we ought to make these meetings a meaningful spiritual journey that lifts up our way of life, we who belong to the spirituality of the Family of Saint Sharbel.

We began the second millennium with the topic of “passing over” and meditated on how to show our identity, so we can “pass over” to the other side. In 2001, we examined the topic of “deepening our roots” and our belonging to Jesus and his Church, so we can continue the long and difficult journey of the new millennium which requires this deep attachment to our roots. After that, in 2002, we explored the topic of “discipleship,” which is a continuation of the deepening of our roots, because when we become disciples of Jesus and advance in the levels of our understanding of his Word, our roots grow stronger, so we can continue our journey as witnesses in the third millennium. Last year, in 2003, we approached the topic of “witness” by word and deed, so that the third millennium could run its true course, reach its end, and pass on the baton to the fourth millennium. Today, in 2004, I would like to continue the journey with the topic of “the banquet” or “the meal” which sustains in us all the activities we have talked about over the years: it gives us sustenance to pass over to a better future, the strength to deepen our roots, the lessons to learn, and the motivation to witness.

Event though we are gathering on New Year’s Eve to welcome the year 2005, the Christmas ambiance, in the beauty of the Mystery of the Incarnation, is still shedding its rays on us. We have celebrated this Christmas in a Eucharistic fashion, and the connection between Christmas and the Eucharist is close. Pope John Paul II wants us to celebrate Christmas in its Eucharistic dimension, since he declared the year starting in October 2004 as the Year of the Eucharist.
Christmas is the Feast of the Incarnation, which means that the Lord took human flesh and became present among us and with us in a visible an concrete way: “The Word became flesh and made his dwelling among us, and we saw his glory, the glory as of the Father’s only Son,” says Saint John the Evangelist in the introduction to the Gospel he wrote. In his last supper with his disciples, Jesus took the bread and wine as signs of his permanent presence among us and with us, so he can live in communion with us, and so we can live in communion with one another. Our God is with us, Emmanuel. He is present in the Mystery of the Body, which is the Mystery of the Eucharist. We stop today to meditate on the banquet, the divine banquet which is set on three tables:
​
In sum, on this feast we are called to the following: This is how we live out Christmas. Yes, this is difficult and demanding. But time is on our side, because we walk forward, and not backwards. If we know how to benefit from it, time will teach us how to realize God’s threefold plan. This is what the story of the feelings and sensations on the Island teaches us, namely, how time alone can teach us how necessary love is in life. Therefore, at Christmas, the Lord entered time out of love to sanctify time for us. Therefore, at Christmas, we are called to a banquet, so let us not waste time.
Amen.