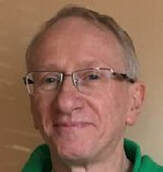 I was born on December 23, 1955, in Alabama and lived there until 1984 when my wife and I moved to Richmond, Virginia. I am retired from the U.S. Postal Service and have one son. He and his wife have two children. I am a Roman Catholic.

In August of 2019, I was rushed to the hospital with severe stomach pains and passing lots of blood.

There in the emergency room I was diagnosed with colon cancer. Two days later, I was operated on. The surgery lasted five hours. While in the recovery area of the surgery room, I had a vision of a man standing not far from the foot of my bed. He was dressed in a black religious robe, had an aura of light around his body and wore a long white beard. He was looking down.

I fell back to sleep and in a while, I heard the nurse trying to wake me up.

If I had not heard the voices say the name Saint Sharbel, I might have thought it was Saint Benedict. I had heard of Saint Sharbel once but did not know anything about him except that he was from Lebanon. I did not know how he looked. I happened to see once on a website for “saint of the day” the name of Saint Sharbel mentioned but had not really researched him before.

After I told a few people about my vision, a friend told me that Saint Sharbel is a saint known for healing. The next day of my stay in the hospital, this friend brought me holy oil of Saint Sharbel and a prayer card. I begin to pray to Saint Sharbel for a positive outcome of the cancer diagnosis and also used the holy oil.

I had to wait a week to find out if my colon cancer had spread and the severity of it. I was told by my surgeon after a week of waiting that the cancer was stage 2 and it had not spread. I needed no chemotherapy. I am cancer free as of today.

Two months before my colon cancer surgery, I was diagnosed with type 2 diabetes. I was taking medication for it but after leaving the hospital, my diabetes has improved so much that I no longer take medication and my blood sugar numbers are low enough that I can control it with diet. I like to think Saint Sharbel is responsible for this as well because I have prayed to him to help heal my physical ailments.