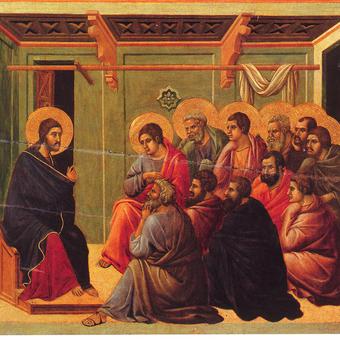 Discipleship - Father Maroun Moubarak
"I give you a new commandment: love one another. As I have loved you, so you also should love one another. This is how all will know that you are my disciples, if you have love for one another.” (John 13:34-35)
​http://www.ayletmarcharbel.org/content/alttlmz-alab-maroun-mbark

Introduction: This the third consecutive encounter with the Family of Saint Sharbel in which we conclude a year and begin another, brimming as we are with Christian with joy and open to God’s Word and to one another. This encounter is no coincidence, but it is rather a divine arrangement through which the Lord is calling us to be ready to receive and give. This is one of the great mysteries of our Christian faith because spiritual experience shows a strong, necessary, and reciprocal connection between receiving and giving, for there is no giving without receiving, and no receiving without giving. They nourish one another in order for the spiritual journey to progress. We gather on this occasion each year to increase the experience of receiving the Lord’s word and to increase our giving through our actions and testimonies.

During the last two years we reflected on two topics in line with the transition from the old millennium to the new. In 2000, the year of the jubilee, we talked about “passing over”; and last year, on the occasion of the launch of the jubilee, after we had “passed over,” we talked about “belonging,” or deepening our roots right from the start, because the journey is long. This year, in 2002, we will discuss “discipleship,” which means nourishing this initial belonging with continuous belonging through the mobilization and development which give our spiritual journey the momentum it needs to keep moving toward its goal.  By going to the cave, entering it, and connecting what they knew theoretically from the angel to what they personally experienced when they saw the Child in the cave, the shepherds reached a “professional” level in their relationship with Jesus. We too are invited to this kind of professionalism in listening and contemplation. Listening strengthens our obedience to the Lord’s whisperings in our hearts and inside us, and maximizes our ability to abandon ourselves to God. Consequently, we get on the same frequency with the Lord. As for contemplation, it increases our vitality and activates our intention to pursue the truth that we have discovered, motivating us to start acting. This is what we learn today.

4- Third level: “Creativity and Stardom”
After this much productivity, man earns a wider experience and reaches new levels of operating and producing, and this is a sign of enrichment. A star is known for:In the cave, we also see the shepherds returning to their lives, praising and acclaiming God. They have become stars, and, through their life and testimony, they start to proclaim the news of Christ and guide people to Him. They shine because their experience and knowledge have made them return to their normal life, but not to their previous “normal” state. They witness through their happiness, their astonishment, and their discovery à They combine what they have been told with what they have seen and contemplated. They went beyond their first experience to a higher level. They didn’t limit themselves to the lower realm, but rose up to a higher realm. They reached universality which transcends time and space. This helps us to understand what “praise” is all about.

Conclusion: Christmas is the school of divine creativity in directing humanity toward stardom. The Child Jesus born in a cave, the Son of God, came to teach humanity a lesson about how to succeed in life on earth, and his approach to success is “lifting up oneself by lowering oneself.” Have you ever heard of an arrogant person who was able to solve a problem? On the other hand, we have all certainly known many humble people who got around their problems, overcame them and ended up succeeding. This is the message of Jesus’ Higher Institute for the Arts of New Life for this year. This is the Mystery of discipleship that we all strive to achieve.
Family of Saint Sharbel USA
9340 Braymore Circle, Fairfax Station, VA 22039