​He was baptized on August 16, 1828 with the name of Youssef Antoun Makhlouf. He was the fifth child in a poor, yet respectable and devout family, having two older brothers and two older sisters.
His father died on August 8, 1831 as he was returning home after compulsory enlistment in the Turkish Army under the Ottoman rule in Lebanon.

Along with other children, Youssef learned Arabic and Syriac from the priest of the village.
In 1852, he moved to the monastery of Annaya for his second year of novitiate. There, on November 1, 1853, he professed his monastic vows of chastity, poverty and obedience.

He received his formation in theology at the monastery of Saints Cyprian and Justina in Kfifan between the years 1853 and 1859. Father Nemtallah Kassab El-Hardini (canonized on May 17, 2004) was the teacher of Saint Sharbel and his fellow seminarians.

On July 23, 1859 Saint Sharbel was ordained priest of the Lebanese Maronite Order. He spent 16 years (1859–1875) in the monastery of Annaya, praying and working in the fields with his brother monks. He was unhesitatingly obedient to his superiors, faithfully observed all the rules, and lived a life of sacrifice under austere conditions.
He followed the path of the hermit fathers by kneeling austerely before Jesus in the Holy Eucharist, praying quietly to Him, and immersing himself in Him throughout the night. He came to be known as “the saint inebriated with God.” During his life, Saint Sharbel not only healed people from physical diseases, but also from spiritual ones, even casting out demons.

While celebrating the Divine Liturgy on December 16, 1898, he suffered a stroke and endured eight days of terrible pain calmly, silently, and prayerfully. Saint Sharbel kept repeating the prayer he could not finish in the Divine Liturgy: “Father of truth, behold Your Son, the sacrifice in whom You are well pleased. Accept Him who died for me…”. He would also repeat the names of Jesus, Mary, Joseph, as well as Saints Peter and Paul, the patron saints of the hermitage. He died on Christmas Eve, 1898, and was buried at the monastery on a very cold and snowy day. Only a few monks were able to attend his burial ceremony.
Saint Sharbel’s superior, Father Antonios Mishimshany wrote about him in the monastery’s records of the dead: “On the 24th day of the month of December 1898, Father Sharbel, the hermit of Bekaa Kafra, died after suffering a stroke and receiving the Sacraments of the dying. He was buried in the monastery’s cemetery. He was sixty-eight years old. Father Antonios Mishimshany was the superior of the monastery. What God will perform after his death will be sufficient proof of his exemplary behavior in the observance of his vows, to a degree such that we can say that his obedience was angelic, not human.”
His Life After Death
​
Following his death, people started to report seeing lights around his tomb. When Church authorities opened the tomb, they found Saint Sharbel’s body incorrupt and exuding sweat and blood.

On April 15, 1899, the Maronite Patriarch allowed the body to be transferred to a special coffin, which was placed in a new tomb, inside the monastery. Pilgrims began flocking to his tomb and praying for his intercession. God granted many of them physical healings and spiritual blessings. 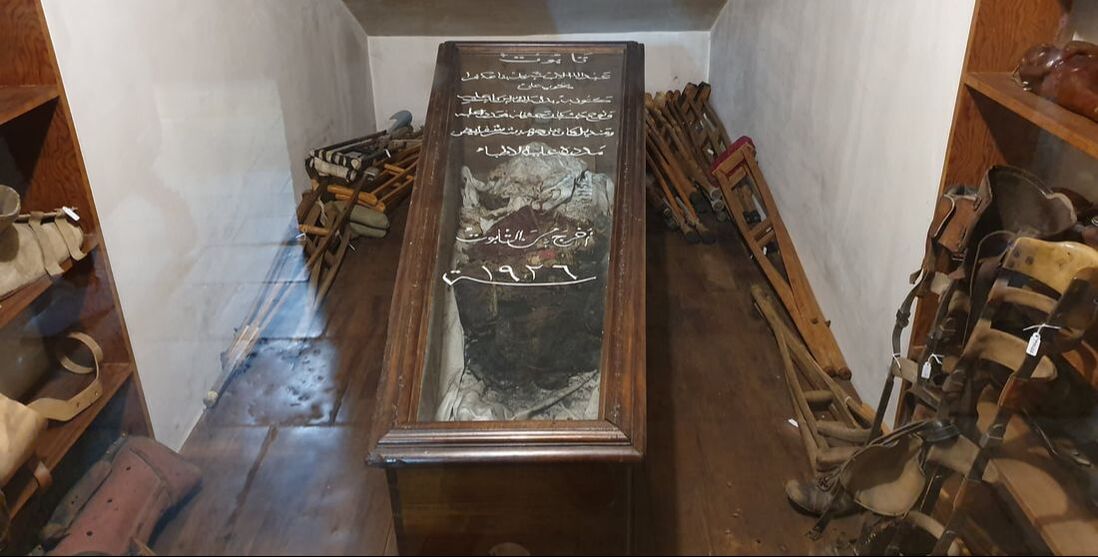 One of Saint Sharbel's Old Coffins in the Monastery of St. Maron  in Annaya, Lebanon.  Image by Naanouh Productions
Saint Sharbel’s cause was officially presented to Pope Pius XI on December 12, 1925.

Because of the exuding of sweat and blood, Saint Sharbel’s coffin and tomb had to be changed several times through the years. On July 24, 1927, the body was transferred to a third tomb.

In 1950, Saint Sharbel’s tomb was opened in the presence of certified doctors and members of an official committee from the Church and the Lebanese government, who verified the integrity of the body. They wrote a medical report and put it in a box inside the coffin. Immediately, healings proliferated in an amazing fashion! Tens of thousands of pilgrims of different religions and communities flocked to the monastery of Annaya, asking the intercession of the holy hermit. Saint Sharbel’s body continued to bleed and perspire for sixty-five years after his death.
Canonization of Sharbel
​On October 9, 1977, his Saint Paul VI presided over the canonization ceremony of Blessed Sharbel in the Vatican basilica. The miraculous healing of Miriam Awad from throat cancer in 1967 was accepted as the official miracle for canonization. 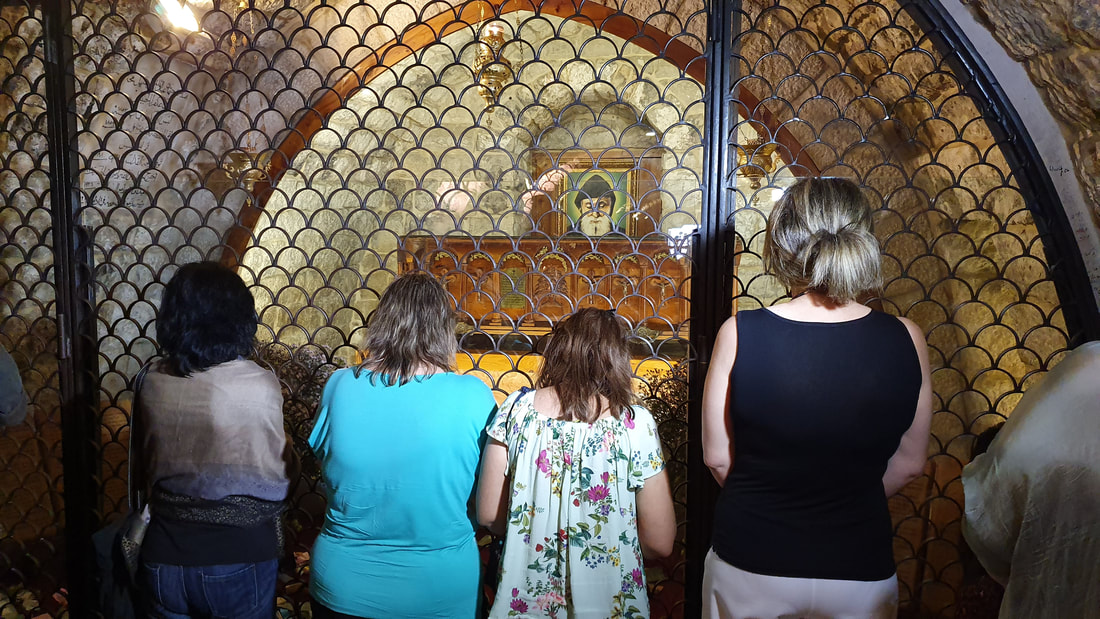